So after parting ways with two of my road bike I have now saved enough to purchase a GPS cycling computer, which will hopefully provide better functionality than my Apple Watch 3. I wanted to get the bundle with the speed, cadence and HR sensor, hoping I could improve during the summer months when I ride a lot more. 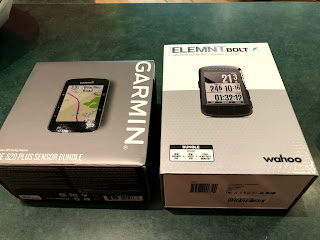 My budget was around $500CAD and I had a choice of getting the Garmin 520 Plus bundle or the Wahoo Elemnt Bolt bundle. After several weeks of reading reviews and watching youtube videos by DCRainmaker, I had decided on really getting the Bolt.

I also wanted to see both devices in person instead of just ordering online, so after a group ride with CycleWR my friend Arcy and I decided to drop by Ziggy's Cycle in downtown Kitchener. 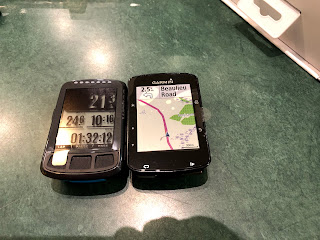 They both felt great, the build on both devices was really impressive, well this is my first serious bike computer so I guess I may not be judging them properly. The screen size is the same, the Garmin had nice colours and really reminded me of my old car GPS. However what stood out in all the reviews about the Wahoo is that the ease in which it can be configured using your phone. I've owned a Garmin Fenix 3 HR and it was a pain having to push all those buttons every time I need to change something. The Garmin connect software was really meh and didn't even miss it after I was done with the Fenix. 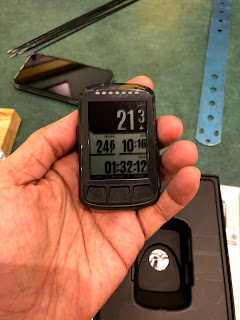 Anyways, long story short, Ziggy's was selling them both tax free and I decided I'd pick the Wahoo, loving it so far! Used it on my trainer and had my first commute in the snow this morning, battery was at 80% after I had used it probably an hour. 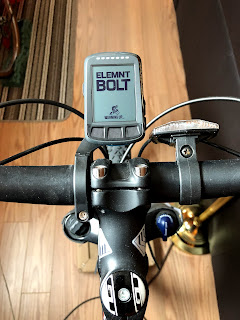 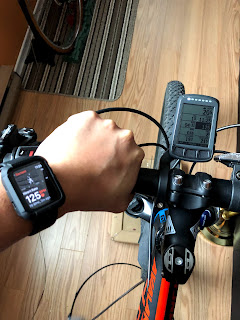