Got hit by the Pokemon Go fever

Watched the shows when I was young and also played the games but I've never been as obsessed of a game as I am now! Basically combining gaming and my now favorite activity... cycling! Never did use my bike phone mount often but after this game I have it attached on  my commuter and use it pretty much daily to hunt pokemons and to visit pokestops.

And I'm not the only one, each day I see kids, teens and adults ride their bike while looking at their phone. Although I would advise that they really get a phone mount to be on the safe side. My lunch rides have now been pokelunch rides, I would head over to the gazebos near the Lion's Lagoon splash pad at Waterloo park where it seems most pokemon players converge and setup lures.

Even my wife who is normally limited to playing "candy crush" type games have been playing as well, I'm hoping for her health that she'll continue as it seems that this is a good way to convince her to ride her bike more. There are four stops in the park near our house and whenever she runs out of pokeballs we sometimes would take a stroll or she'd take her bike and hit all the stops.

The game itself is a poor imitation of the actual pokemon games, I think the EXP system is broken, you basically get 100xp for each pokemon you catch regardless of how difficult or how high their CP is. The only action your pokemon ever gets is when you fight in a gym, however they don't gain any CP increase you only get a measly amount of EXP if you win some fights. Would also love to be able to trade pokemons from other trainers, the technology is there and I think this wouldn't be that difficult to implement. 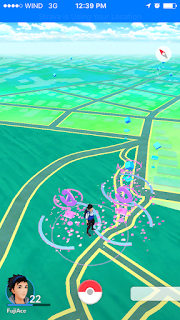 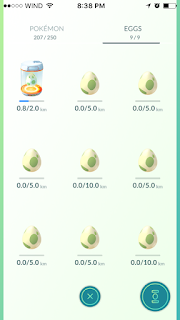